Start Your Virtual Consult
Home / Periodontitis vs. Gingivitis: Why Early Detection Is Important (And So Are Your Dental Cleanings!)

Periodontitis vs. Gingivitis: Why Early Detection Is Important (And So Are Your Dental Cleanings!) 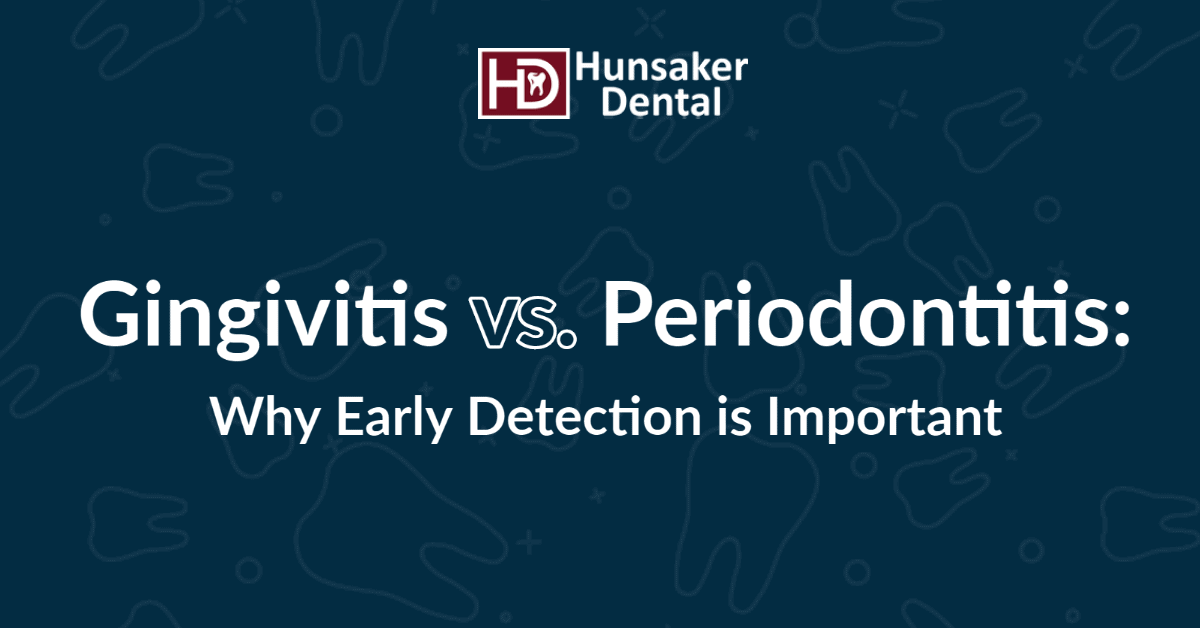 Gingivitis: You recognize the word. Every dental office in America has a brochure, scrolling slideshow, or flyer in their lobby talking about the symptoms of this disease. Characterized by inflammation of the gums surrounding the base of your teeth, Gingivitis is a mild form of a much more serious disease, Periodontitis (which may not sound as familiar to you).

Though both of these diseases can have damaging effects on your teeth, one is much more serious than the other. With symptoms and causes that are basically identical, how do you differentiate between the two? And what makes Periodontitis so much worse than Gingivitis? The key lies in early detection. And the importance is found in your routine dental hygiene visits.

First of all, let’s talk about Gingivitis. What is it?

Gingivitis, defined as a “common and mild form of gum disease-causing inflammation, redness, and swelling in the gums that surround the base of your teeth”, is diagnosed in some form by dentists in a large majority of the patients they see every day. In fact, close to 80% of adults in American have some form of gum disease (with 47.2% being the more advanced Periodontitis, as reported by the CDC).

Gingivitis is incredibly common and can be brought on by a laundry list of health characteristics, such as:

However, many cases of Gingivitis are not caused by the factors above but are instead solely attributed to poor oral hygiene. Lack of thorough brushing and routine flossing can leave plaque in place, turning it to tartar at the gum line and irritating the gingiva, or gums that surround your teeth. Once plaque has hardened to tartar, removal of tartar is only possible by visiting your dentist for a cleaning. Gingivitis causes sensitivity in the gums surrounding your teeth, swelling, and even bleeding during brushing and flossing.

If left untreated, Gingivitis can progress to Periodontitis

Periodontitis is characterized by the same causes and symptoms as Gingivitis but is considerably more serious. Periodontitis is defined as a “serious Gingiva infection that permanently damages the gums and the jawbone”, and has lasting consequences even if detected and treated. Symptoms that your gum disease has progressed to Periodontitis include:

The infection that started in your gums has now progressed to the bone in your teeth, making the damaging effects much more permanent. When left untreated, Periodontitis can result in tooth loss. The bacteria may also enter the bloodstream through the infected gums and can be linked to other health issues such as respiratory disease, rheumatoid arthritis, and blood sugar regulation issues with diabetes.

As discussed in our previous post on the importance of routine dental cleanings, there is more than one reason to visit your local dentist every six months. While Gingivitis is common and plaque buildup happens between visits to many patients, thorough cleaning by your dentist and removal of tartar at the gum line can eliminate the presence of Gingivitis in your mouth, and keep it from advancing further. In addition to a thorough cleaning of your teeth, your local dentist may opt to do a preventative treatment such as fluoride on your teeth to help maintain the health of your teeth in-between visits.

While six-month cleanings are always important, if you notice soreness, sensitivity, or bleeding in your gums, it might be time to give your local dentist a call for a quick dental exam. At Hunsaker Dental, you can give us a call or shoot us an email to get on the schedule at our Salem, Monmouth, or Aumsville locations. Early detection is key for keeping gum disease at bay, so don’t lapse on your six-month cleanings!